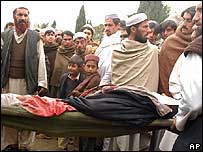 Nine Afghan civilians have been killed in a bombing raid in Kapisa province, Afghan officials say.

US forces have confirmed carrying out an air strike in the area but say they have no accurate casualty information.

The news comes shortly after US forces were accused of killing 10 civilians during a shoot out on Sunday in Nangarhar province.

Journalists say US troops confiscated their photos and video footage of the aftermath of the violence.

The BBC’s Alastair Leithead in Kabul says the international mission to Afghanistan is to help the government and the people. But heavy fighting and suicide attacks have led to the death of thousands of innocent people over the past year.

President Karzai has been critical of the international forces in the past, saying they should do more to prevent civilian casualties.

He said the nine dead civilians included five women and three children and that the raid was carried out by Nato forces. Nato have denied any involvement.

But later a US military statement said US-led forces had “dropped two 2,000-pound (900-kilogram) bombs” during an air strike in Kapisa after a Nato base had come under attack.

A US spokesman, Lt Col David Accetta, said the Nato base had come under rocket attack and that “two men with AK-47s” were seen leaving the scene of the rocket attack and entering a compound,” the Associated Press news agency reports.

“These men knowingly endangered civilians by retreating into a populated area while conducting attacks against coalition forces.”

Local people say that the coalition forces then bombed a mud-brick home, killing nine members of the same extended family.

The news came shortly after President Hamid Karzai had condemned an incident on Sunday in which US forces were accused of firing indiscriminately at civilians in the eastern province of Nangarhar.

The Americans say the Nangarhar fighting, near the city of Jalalabad, started when a convoy of marines was attacked by a suicide bomber and came under co-ordinated small-arms fire. 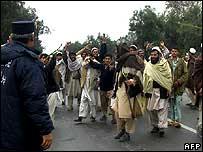 They say their soldiers returned fire, and acknowledge that at least eight Afghan civilians were killed, with a further 35Â  injured.

President Karzai has “strongly condemned the incident which took place due to a suicide attack on a coalition convoy and which prompted the coalition force firing on civilians that killed 10 people”, a statement from his office said.

Reports say that as they left the scene along a busy highway, the Americans fired indiscriminately on civilians and their vehicles.

Thousands of local people took to the streets on Sunday to protest against what happened. The Afghan authorities have launched an investigation into the circumstances of the militant attack.

The Associated Press news agency says it will complain to the US military after journalists said US soldiers deleted footage of the aftermath of the Nangarhar violence.

Freelance journalists working for the Associated Press said troops erased photos and video showing a vehicle in which three people were shot dead during Sunday’s incident in the eastern province of Nangarhar.

Post Views: 215
Previous PEJAK Agent Arrested in Northwestern Iran
Next In memory of the hero Abdul Khaliq, The Martyr.