KABUL (Reuters) – More than 10,000 ethnic Hazaras protested in the Afghan capital on Tuesday, calling for President Hamid Karzai to resign over killings of their kin by rival Kuchi nomads.

The angry marchers sent police fleeing on the outskirts of Kabul, then chased them until hundreds of officers and soldiers blocked one of the main roads into the city, next to Kabul zoo.

The marchers then sat down in the middle of the road until one of their leaders, parliamentarian Haji Mohammad Mohaqiq, addressed the crowd and persuaded them to peacefully disperse.

Trouble has been brewing between the two minority groups for around a year due a dispute over grazing rights as the Kuchi nomads bring their herds into the Hazara-dominated highlands of central Afghanistan during the hot Summer months.

The mainly ethnic Pashtun nomads killed more than a dozen Hazara villagers in the Behsud district of the central Maidan Wardak province this month, Hazara leaders said. Kuchis said Hazaras attacked their camps and killed a number of nomads.

There were similar clashes in the same area last year and Afghan human rights officials feared the two groups might resort to more widespread violence as neither side had any confidence in the government to resolve the issue.

But Karzai on Sunday attempted to head off the discontent by banning Kuchis from the Behsud district and Khalili ended his boycott of cabinet meetings, newspapers said.

Mohaqiq appeared unsatisfied by Karzai’s move however, calling out to demonstrators “Karzai” to which the crowd answered “resign”. Mohaqiq persuaded the marchers to end the demonstration, saying he would give the government more time to take further action.

The mainly Shi’ite Hazaras, said to be descended from Genghis Khan’s hordes, are traditionally marginalized group and suffered massacres and attempts at ethnic cleansing under the hard-line Sunni Taliban regime ruled Afghanistan from 1996-2001.

While poor rains have heightened competition for grazing between the two groups, Kuchis complain Hazaras have received strong international backing since the Taliban’s fall, while Kuchis, they say, are perceived as Taliban collaborators. 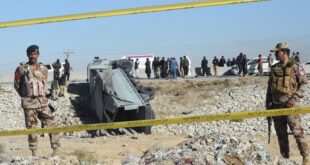