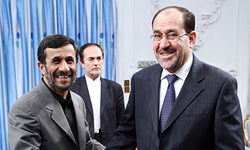 TEHRAN (FNA)- Iran’s President Mahmoud Ahmadinejad said that it was Iran’s duty to be by the side of Iraq.

“Our Islamic and humanitarian duty requires us to be incessantly by the side of Iraqi people,” he said.

Referring to the potentially fertile grounds for the bilateral cooperation, he said that “the two countries of Iran and Iraq can enhance their commercial ties in diverse areas at high speed.”

Al-Maliki, for his part, extended his gratitude to Iran for its humanitarian aid to the Iraqi nation and called his meeting with Iranian high ranking officials as “constructive.”

He went on by adding that “the condition today requires Iraq to open the doors of friendship to neighboring countries, especially to Iran, since there are considerable mutual interests of Iraq and these states.”

“Iraq is very optimistic towards its relations with Iran”, he added.

Al-Maliki arrived in Tehran on Saturday morning for a two-day official visit to improve ties between neighboring Iraq and Iran.

Shortly after his arrival, the Iraqi delegation held first round of negotiations with Iranian officials on Iran’s partnership in Iraq’s development projects.