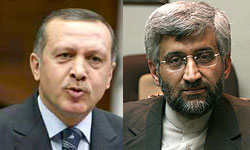 According to media reports, Jalili conveyed Ahmadinejad’s message regarding the Israeli offensive on Gaza.