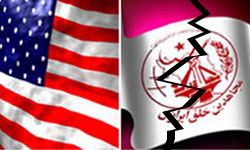 TEHRAN (FNA)- US forces continue to protect members of the anti-Iran terrorist group, the Mojahedin-e Khalq Organization (MKO) when they are out of their headquarters, an Iraqi provincial official said Wednesday.

“MKO members rarely go out of the (Ashraf) camp and American Forces protect them when they are out,” Diyala province assembly chief Ebrahim Bajalan told FNA correspondent in Baghdad.

Pointing to his recent visit to Ashraf camp in Diyala province, Bajalan added, “According to statistical figures given to me by Mojahedin, currently there are 4000 people in this camp and the responsibility for their protection has been transferred (by the US) to Iraqi army.”

“Nobody can enter this camp and media reporters should receive permission from several security checks for entering the camp,” he said.

In response to a question on the MKO’s financial resources, the Iraqi official said, “MKO officials told me that their financial assistance sent from abroad has weakened now and only the members would provide for the camp’s expenditures.”