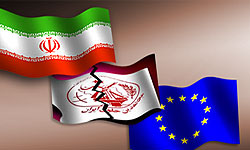 TEHRAN (FNA)- The European Union decided Monday to remove the anti-Iran terrorist group, the Mojahedin-e Khalq Organization (MKO), from its blacklist, a move which caused angry demonstrators to pour to the streets in Tehran.

The decision come as hundreds of Iranians demonstrated in front of the French embassy to voice strong protest against the European Union’s decision.

The angry protesters carried some placards reading some mottoes like, “We oppose striking the name of Monafeqin (the Hypocrites, as MKO is referred to in Iran) off the blacklist” and “Death to Monafeqin”.

The decision by the bloc’s foreign ministers means that as of Tuesday, the assets of the anti-Iran group will be unfrozen, a move likely to further damage relations strained over Tehran’s nuclear program.

“What we are doing today is abiding by the decision of the court, there is nothing we can do about the decision,” said Javier Solana, the EU’s foreign policy chief.

Earlier, In Tehran on Sunday Iran’s foreign ministry lashed out at the EU stance.

“The record of the actions of hypocrites (MKO) is very serious and if the EU decides to remove them from their list of terrorist groups, it will be considered a conscious political decision,” the ministry announced in a statement issued prior to the EU decision.

The MKO is behind a slew of assassinations and bombings inside Iran, a number of EU parliamentarians said in a letter last year in which they slammed a British court decision to remove the MKO from the British terror list. The EU officials also added that the group has no public support within Iran because of their role in helping Saddam Hussein in the Iraqi imposed war on Iran (1980-1988).

According to the Human Rights Watch report, the outlawed group puts defectors under torture and jail terms.