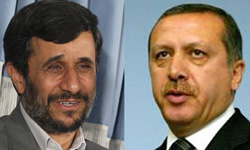 He was given a hero’s welcome when he returned to Turkey from Switzerland.

“The act of the Turkish prime minister reflects expectations of all Turkish people, the nations of the region and the entire world. We appreciate it. He behaved exactly how he should have behaved in that situation,” Ahmadinejad told journalists.

The Iranian president noted the Israeli government’s war crimes in Gaza and declared that no aim could justify the killing of Palestinian civilians.

In Tehran on Saturday a group of protesters rallied outside the Turkish Embassy in support of Erdogan’s actions. They chanted anti-Israeli and anti-American slogans, and some schoolchildren in the crowd carried flowers.

The new US envoy to the Middle East, George Mitchell, is due to meet Erdogan in Turkey on Sunday.