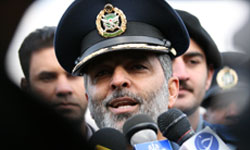 TEHRAN (FNA)- The Islamic Republic’s army enjoys everything needed for its defense, including equipment, weapons and tactics, lieutenant commander of the Iranian army said Thursday.

“Our forces, relying on their power of faith and vigorous young people that work for the army, are able to produce everything we need in the defense industries,” Deputy Commander-in-Chief of Iranian Army Brigadier General Seyed Abdulrahim Mousavi said.

The power of faith, belief in victory and the successes that Iran has achieved in the last 30 years following the Islamic Revolution, are the causes of Iran’s superiority in the region, he reiterated.

“As we recently witnessed in the Gaza war and prior to that in Hezbollah’s victory against the Zionist regime (in summer 2006), despite Israel’s hi-tech equipment, they (Palestinians and Lebanese) could defeat the armed-to-the-teeth army of Israel through relying on their self-belief and power of faith,” Mousavi said.

The General also announced that the Army is establishing an independent air-defense base.