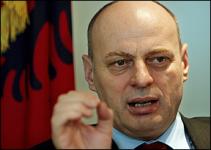 Kosovo could have better used its advantages to promote its image abroad and to ensure the rule of law, former Prime Minister Agim Ceku said ahead of the one-year anniversary of Kosovo’s secession from Serbia.

“The first independence anniversary is a crucial moment. During these days we all have to think for our achievements, our failures, and to start learning from the mistakes”, said Ceku of the February 17 anniversary.

He noted that while Kosovars had learnt ‘the theory’ of the state, they lag in practice.

“The first year of independence was the year of the internationals”, he said, adding that the country’s institutions had not worked well enough.

“We could have promoted our image abroad; could have worked in country’s integration; Serbs integration; rule of law and enforcement of security institutions”, said Ceku during a press conference on Sunday.