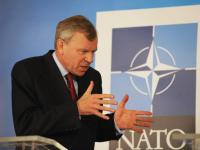 NATO is concerned about the possibility of Slovenia holding a referendum on Croatia’s membership in the alliance, worried both about delays and a vote denying their neighbour NATO accession.

Two Slovenian nationalist groups on Monday initiated a referendum on Zagreb’s accession to NATO, saying Croatia should not join the alliance in April because of a border row with Slovenia. The Slovenian parliament endorsed Croatia’s NATO accession with a vast majority last week, but this decision would be annulled if its citizens voted against the neighbour joining in a referendum.

All NATO member states have to ratify the invitation for membership in alliance by the beginning of March so Albania and Croatia, countries that were invited last year to join NATO can participate as full members on upcoming summit, which will be held on April 3, and 4th.

“Slovenia is in a serious race against time”, NATO spokesperson James Appathurai said in Brussels and stressed that he hopes that Slovenia will not be the only country unable to complete ratification in time.

Appathurai noted that ratification of membership protocols was an internal process, which NATO cannot and will not influence. However, he said NATO wanted all 26-member states to complete the proceedings in time so that Croatia and Albania could join the alliance at the summit in early April.
NATO sources told Balkan Insight that NATO member states are already nervous because of the possibility that the summit agenda might not be implemented as scheduled.

Sources say that NATO Secretary General Jaap de Hoop Scheffer met the Slovenian permanent representative in the alliance on Tuesday to ask from him for further explanations on the situation. “The only response that Scheffer got is that everything is in the hands of Slovenian parliament”, one NATO official told Balkan Insight.

Apart from Slovenia, Netherlands and Greece need to ratify the accession protocols for the two new member states but NATO officials are optimistic this will be done soon. Appathurai already confirmed that both countries are advancing very well in this direction.