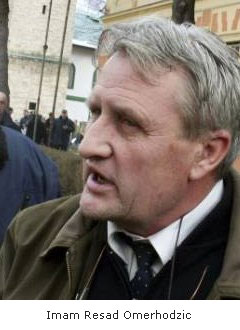 The convicted Bosnian Muslim Imam that was sentenced to 18 months in jail for sexually molesting an underage girl told the gathering audience in the Bosnian village where he served and committed the crime that he is innocent and his claims were supported by a chorus of little Muslim girls that gathered around him to weep and shout that the molestation claims area a “Lie”.

“Liers,” little girls shouted in the chorus while weeping for the Imam Reshind Omerhodzic who, witnesses testified, took a young underage Muslim girl N.T. to his office and made her hold his penis repeatedly.

“It is very hard to determine on basis of television pictures and news articles how is it that so large a number of children gathered in one place and believe that all of it was not staged,” said Muhamed Dzemdzic, Director of the Helsinki Committee for Human Rights for Bosnia.

Nevertheless, Dzemdzic says, the gathering of children that exposes them to stories of underage sexual molestation is not good for the children nor the parents.

“That was not the place for children and that was a violation of their human rights,” said Dzemdzic.

No witness accounts have said that the massive gathering in the village of Gluha Bukavica to publicly protest the conviction of the Imam was staged.

The genitor of the mosque in Gluha Bukavica, Salkan Hodzic, said that parents are ready to send 150 of their children to the court in Tranvik to testify that the Imam is not a child molester.

“Imam is not guilty,” children followed up on Hodzic’s claims.

The family of the molested girl, and the witness who testified of the molestation, have said that the villagers have threatened them with death because they believe that the girl lied.

“I will have to move to safety,” says Salih Hodzic, a witness that testified at the trial of Imam Omerhodzic.

Days after Imam’s conviction, Bosnian’s chief Imam Mustafa Ceric who was schooled in Chicago in addition to Middle East, went to the village and appealed to his faithful Muslim flock not to kill the molested girl, yet remained silent about Salih Hodzic.

Once in the village of Gluha Bukavica, Imam Ceric proceeded to interrogate the molested child himself.

“Did the Imam place his hand on your gender organ?” asked Imam Ceric.

“Did you [put] your hand on his gender organ over the clothes or did he tell you to unbutton his clothes?” asked Imam Ceric again.

“Over the clothes,” said the molested girl.

“And did the Imam get excited?” inquired Imam Ceric.

“No,” replied the molested girl.

Mehmed Halilovic, ombudsman for Bosnian media, says that Imam Ceric’s questioning is not only offensive but it is an attempt to usurp the justice system of the state.

“This is a clear manipulation of children that is incomprehensible and unacceptable,” says Halilovic.

“Moreover, [Ceric’s] statement that he came to Gluha Bukovica to collect the deposition from the one that accused the Imam is to be condemned because it seeks to take over functions of the judicial branch,” says Halilovic.

Immediately after the deposition, Bosnia’s Chief Imam Ceric accused the lawyer, Dusko Tomic who represented the molested girl, of anti-Islamic activities, bias and attempts to destroy the Islamic community of Bosnia.

“Leave, I beg you, the Islamic community at peace,” said Imam Ceric to Dusko Tomic, who is not a Muslim.

“You do not love Muslim children more then do Muslims. You claimed lies. You are not a Muslim and you do not know what it means to be a Muslim. You can not love N.T. more then I do,” Imam Ceric frisked at the lawyer of the molested girl.

“There, he heard us! After all, our relationship with the neighbors is nonexistent. The problem is the truth! Let the truth be spoken only,” replied Avdija, the mother of the molested child, after Imam Ceric departed.

Addressing the crowd, Imam Ceric warned them not to attack and physically abuse the molested girl warning them that she has a right to live.

The witness who saw Imam Omerhodzic molest the little girl then told the media of how he and his family fear for their life in the village.

“After the conviction it got worse. They write petitions of support for the Imam. Neighbors are issuing me threats. Ten people have openly threatened me in front of 50 witnesses. They said that I need a bullet in the head. Last night, after a meeting in the mosque, shootings occurred three times in front of my house,” says Salih Hodzic.

“I am sure that [Imam Ceric] will conclude that the imam [Omerhodzic] is innocent,” concluded Hodzic.

Imam Ceric never declared Omerhodzic innocent, nor guilty for that matter, but he suspended the convicted Imam and ordered him to leave the village.

“His removal was agreed upon today,” said the regional chief Imam Nusret Avdibegic on Tuesday.

Omerhodzic will lose half of his pay that the Bosnian Islamic Community pays, his health benefits and the pension insurance.

Then, the Imam Omerhodzic will serve jail time for molesting a little Muslim girl.