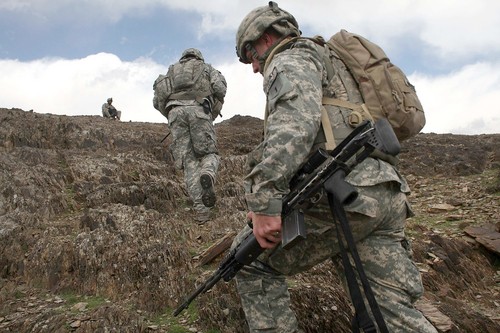 Afghanistan’s defense minister warned Thursday that the Obama administration’s proposed changes in U.S. war strategy risk undermining Kabul’s civilian government because they appear to scale back U.S. goals in the country.Abdul Rahim Wardak said he was troubled by recent comments from senior U.S. officials that they were “lowering expectations” in Afghanistan in order to set more “obtainable goals,” saying such language recalls memories of the U.S. desertion of Afghanistan after the Soviet Union pulled out in 1989.

Changing course, adopting a new strategy of containment or dropping the idea of a strong central government will be falling into the trap the enemy has laid, helping them to achieve their evil objectives,” Wardak said in a speech at a Washington think tank before meetings with U.S. diplomatic and military officials.

Wardak’s comments were among the strongest from an Afghan leader since President Obama announced that he was ordering a revamp of the U.S. military strategy in Afghanistan. They appeared to be aimed at Defense Secretary Robert M. Gates, who in recent weeks has said U.S. strategy would be to scale back objectives there.

In congressional testimony and news conferences, Gates has said the U.S. should focus on helping the provincial governments, rather than the central government, and narrow its mission to blocking terrorist havens from redeveloping in the nation.

“My own personal view is that our primary goal is to prevent Afghanistan from being used as a base for terrorists and extremists to attack the U.S. and our allies,” Gates told the Senate last month. “Whatever else we need to do flows from that objective.”

Gates is not alone, however. Obama and Vice President Joe Biden have indicated frustration with Afghan President Hamid Karzai, who has been accused of failing to stamp out corruption and extend public services.

The growing tensions came amid a weeklong visit to Washington by senior Afghan and Pakistani officials for meetings on regional strategy with the new administration.

But Wardak, a former mujahedin commander who is widely respected in Western military circles, appeared frustrated with signals from the administration and implied that U.S. efforts had contributed to Afghanistan’s problems by devoting more resources to Iraq.

“Any comparison with other successful campaigns in other nations should be judged on the basis of the resources dedicated,” Wardak said. “The Taliban lacks strong leadership. They do not have an ideology that the Afghans can embrace. The threat is not yet strong, but it’s growing because our joint efforts have been weak.”

During a question period after his address to the Center for a New American Security, a 2-year-old Washington think tank that has provided several senior officials to Obama’s administration, Wardak also objected to the Pakistani government’s recent move to sign a peace deal with Islamic radicals in Pakistan’s lawless western territories.

Wardak said such overtures, which were tried by former President Pervez Musharraf, never succeeded and only shifted the attention of extremists onto other targets.

“In the past . . . the results were [that] more terrorist focus was diverted into Afghanistan,” he said