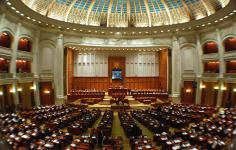 With 158 votes for and 128 against, MPs in the second chamber of parliament, the Camera Deputatilor, decided to strip Nastase of his parliamentary immunity from prosecution and probe two corruption cases.

In August last year, MPs voted against prosecting Adrian Nastase. He was the prime minister of Romania from December 2000 to December 2004 and competed as the Social Democratic Party

(PSD) candidate in the 2004 presidential election, but was defeated by centre-right candidate Traian Basescu.

State prosecutors say Nastase bribed an anti-money laundering official in 2000 and took bribes worth some 1.3 million euros while serving as prime minister.

According to Romanian legislation, a member of parliament can be prosecuted only with the approval of the legislature.