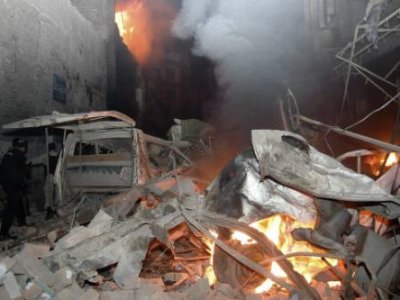 Police tried to defuse a bomb found near a cemetery on the edge of the village of Surkhakhi but it went off as they worked on it.

Six policemen were killed and two were injured on Thursday in a bomb explosion in Russia’s troubled North Caucasus region of Ingushetia, a local police source said.

Ingushetia has been one of the most restive parts of Russia of late. Islamist fighters have been pursuing a separatist rebellion, mounting a series of low-level attacks.

The Kremlin sacked the governor of Ingushetia, former secret police chief Murat Zyazikov, last October. It replaced him with a local former paratroop commander, Yunus-Bek Yevkurov, but the move has failed to stop the violence.

“Police tried to defuse a bomb found near a cemetery on the edge of the village of Surkhakhi but it went off as they worked on it,” an Ingush police source told Reuters. “Six police died and two are in a serious condition.”

The bomb was made from an artillery shell, the source said. “The blast was so powerful that the shockwave smashed windows to smithereens in the neighbourhood.”

The Interfax news agency quoted Russia’s military in the region as saying that local law enforcement chiefs were among the dead in the blast, which occurred in the Nazran district of the southern Russian republic.

In the past few weeks, powerful bomb explosions have been the main feature of acts of violence in Ingushetia, which borders ethnically kin Chechnya where Moscow has fought two wars against pro-independence separatists since 1994.

On Tuesday, a blast killed a man outside the house of Zyazikov, who was away in Moscow at the time, according to the RIA Novosti news agency.

Zyazikov, widely unpopular in the impoverished mainly Muslim republic, had been the target of several assassination attempts in the past.

Four Russian policemen and three suspected rebels were killed last month when a residential building exploded during a police raid in Nazran.