US ‘not winning in Afghanistan’ 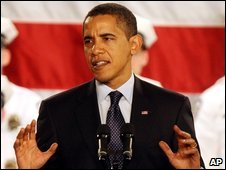 US President Barack Obama has said the US is not winning in Afghanistan, saying it is more complex than Iraq.

In an interview with the New York Times, he said reaching out to the Taleban could be an option, in the same way outreach had worked in Iraq.

However, the “fierce independence among tribes” in Afghanistan presented different challenges, he said.

A month into his presidency, Mr Obama authorised the deployment of up to 17,000 extra US troops to Afghanistan.

Asked if the US was winning in Afghanistan, Mr Obama replied: “No.”

Mr Obama and his advisors are reviewing the US strategy on Afghanistan, and have looked at what has worked in Iraq. There may be some comparable opportunities in Afghanistan and in the Pakistani region,” he said on board Air Force One.

Mr Obama, referring to the US policy in Iraq, said: “If you talk to General [David] Petraeus, I think he would argue that part of the success in Iraq involved reaching out to people that we would consider to be Islamic fundamentalists, but who were willing to work with us because they had been completely alienated by the tactics of al-Qaeda in Iraq.”

However, Afghanistan could be a different situation.

“The situation in Afghanistan is, if anything, more complex,” he told the newspaper.

“You have a less governed region, a history of fierce independence among tribes.

“Those tribes are multiple and sometimes operate at cross purposes, and so figuring all that out is going to be much more of a challenge.”

He also discussed what the US would do if a terror suspect appeared in a country without an extradition arrangement with the US.

“There could be situations – and I emphasise ‘could be’ because we haven’t made a determination yet – where, let’s say that we have a well-known al-Qaeda operative that doesn’t surface very often, appears in a third country with whom we don’t have an extradition relationship or would not be willing to prosecute, but we think is a very dangerous person,” he said.

“I think we still have to think about how do we deal with that kind of scenario,” he added.