Russian warship returns to base after six-month mission 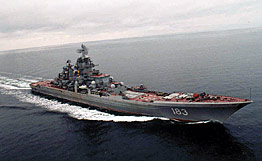 SEVEROMORSK (Northern Russia), March 10  – Russia’s Pyotr Veliky nuclear-powered missile cruiser returned to its main base in northern Russia on Tuesday after an almost six-month tour-of-duty of the world’s oceans, a Navy spokesman said.

“All the tasks set for the mission have been accomplished. The crew is healthy and the weaponry is in an excellent condition,” the spokesman said.

Pyotr Veliky is a Kirov class missile cruiser and the flagship of Russia’s Northern Fleet.

During the mission, which started on September 22 last year, the warship visited a number of foreign ports, took part in Russian-Venezuelan naval drills in the Caribbean and the Russian-Indian INDRA-2009 exercises in the Arabian Sea, and participated in the international anti-piracy operation off the Somali coast.

On February 12, the Pyotr Veliky spotted and detained two speedboats and a large parent ship with 10 Somali pirates on board near Yemen’s Sokotra Island. The pirates were later handed over to Yemen authorities.

Russia announced in December 2007 that its Navy had resumed and would build up a constant presence throughout the world’s oceans.