Albania Opposition Ahead In Poll 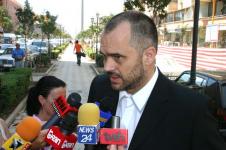 Albania’s opposition Socialist party is ahead of the ruling Democrats of Prime Minister Sali Berisha in voter preference three months before June’s general elections, according to a poll conducted by Zogby International for broadcaster Top Channel TV.

The poll has a margin of error of plus/minus 3.2 per cent, showing that the winner would be to close to call.

According to the poll, Socialist leader Edi Rama has an approval rating of 44 per cent, while Prime Minister Berisha an approval of 36 per cent.

Albanians remain divided about the direction the country is headed with 41 per cent approving it, and 45 per cent disapproving.

Among undecided voters Berisha has a 22 per cent approval rating, while Rama 29 per cent.

Half of the respondents have already chosen for which party to vote, 29 per cent have a preference, while 20 per cent remain undecided.

Albanians ranked employment as their greatest concern, with 67 per cent saying that they are concerned about the employment situation, followed by the economy with 64 per cent, poverty with 43 per cent, followed by corruption with 31 per cent.

Zogby International will conduct a series of polls every month leading to the general elections on June 28, for Top-Channel.

However, like every other poll presented during the electoral period in Albania it has been contested by those who lag in its ratings. Both Prime Minister Berisha and former Prime Minister Ilir Meta either say it is inaccurate, or paid for by the Socialist leader Edi Rama.

Zogby International has dismissed any accusations of partiality.