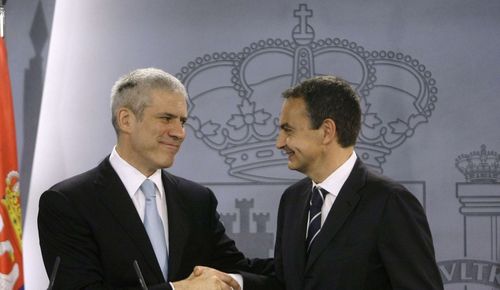 Spanish prime minister Jose Luis Zapatero has reaffirmed that Spain will not recognise Kosovo as independent, newspapers in Kosovo and Serbia reported on March 10 2009.

“Spain’s position on the unilateral declaration of Kosovo’s independence is known – it is non-recognition,” Zapatero was quoted as saying by Kosovo daily Koha Ditore.

“We have maintained this position and we will continue to do so in the future.”

Addressing a joint news conference on March 9, Serbian president Tadic said that his country would never recognise Kosovo, which unilaterally declared itself as independent in February 2008.

“Serbia will not give up on its territorial integrity…with legal and diplomatic means, and it will never recognise the independence of Kosovo,” Tadic said.

The human rights of Serbs in Kosovo were under threat, he said.

Tadic said that Serbia was very grateful to Spain for its principled stance not to recognise Kosovo, and for its support to Serbia’s EU membership candidature.

A report by Serbia’s Blic Online said that Spanish foreign minister Miguel Angel Moratinos, at a meeting with his Serbia counterpart Vuk Jeremic, spoke in favor of unblocking of the Stabilisation and Association Agreement between the European Union and Serbia.

Moratinos said Spain would continue to apply pressure so that the Netherlands made possible implementation of the SAA as well as the transitional trade agreement between the EU and Serbia.

The Netherlands has been a leader in opposing the implementation of the SAA until it is satisfied that Serbia is co-operating adequately with The Hague international tribunal on war crimes in the former Yugoslavia.

Post Views: 240
Previous As Elections Near, Euro-skepticism on the Rise in Macedonia
Next Maldives president orders probe into alleged $2M bribe to recognise Kosovo