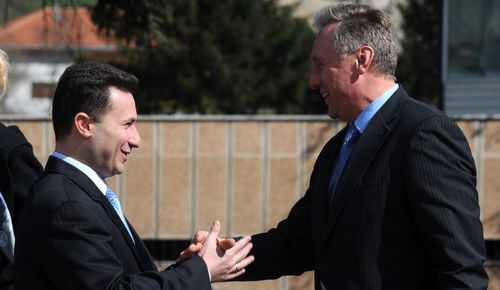 Czech prime minister Mirek Topolanek, whose country currently holds the rotating presidency of the European Union, expressed his support for EU enlargement by the Western Balkans countries during a March 10 2009 visit to Macedonia.

“You have a graduation ahead of you in the form of elections,” Topolanek said in a reference to the presidential and local elections to be held in Macedonia on March 22.

“I hope they will be free, democratic and that you will satisfy the eight conditions set by the European Commission. I hope that you will be able to shape the future of your country in a democratic way, preferably in the Euro-Atlantic Structures,” Topolanek told a news conference in Skopje.

Referring to the elections in Macedonia and Montenegro, he said that international standards must be obeyed. Macedonia’s parliamentary elections in June 2008 were torn by violence in some ethnic Albanian areas, and various Western European voices have said that they expect this year’s elections to be conducted properly.

The Czech Presidency said that it supports the ongoing integration process in both countries; “however, the continuation and the speed of the accession process are now in the hands of each country,” a media statement said.

Macedonia’s Nato membership aspirations have been blocked by Greece because of a prolonged dispute between Athens and Skopje over the use of the name Macedonia. The Czech Presidency media statement on Topolanek’s visit referred throughout to “the former Yugoslav republic of Macedonia”.