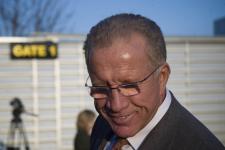 The recognition of Kosovo’s independence by the Maldives has created a furore in this small chain of Indian Ocean islands.

After a good of lobbying by Kosovo politicians, the Maldives recognised the country on February 19. But just two weeks on, President Mohamed Nasheed has ordered police to investigate allegations that government officials were bribed to bring this about.

An alleged bribe of $2 million, according to media in the Maldives, was delivered by a Kosovo businessman, Behgjet Pacolli.

Pacolli, head of the New Kosova Alliance party, AKR, the first public figure to announce recognition by the Maldives, has firmly denied the allegation.

“This is speculation made up by the Serbian government,” he told Balkan Insight.

Pacolli, who has been publicly announcing and promoting himself as a lobbyist for Kosovo’s recognition, especially in Middle Eastern and Central Asian countries, said that he was facing an active counter-lobby from the Serbian side.

“Serbia is lobbying against Kosovo’s recognition in the same countries where I am [working],” Pacolli said.

He noted that a 21-member delegation from Serbia, led by the Centre for Applied Nonviolent Action and Strategies, CANVAS, had lobbied Maldives opposition groups to bring about a cancellation of the recognition of Kosovo.

According to Pacolli, the opposition had then pressurised President Mohamed Nasheed into starting an investigation.

Balkan Insight has obtained independent confirmation that a delegation from Serbia was staying in the Maldives.

The CANVAS delegation to the Maldives was led by Srdjan Popovic, a former student leader and former official in Serbia’s government.

Balkan Insight can confirm that Popovic was staying in the Maldives, information gleaned from his Facebook profile. We tried to contact him on the telephone but he was unavailable.

Pacolli says the Serbian lobby, working to prevent further diplomatic recognition of Kosovo, is very active. However he denies that he would bribe officials to win recognition from Asian countries.

The Maldives Foreign Minister, Ahmed Shaheed, has also rejected the allegations of bribe-taking.

In an interview given to Miadhu.com, Shaheed said the government believed that it was essential for a 100-per-cent Islamic country like the Maldives to recognise the independence of Kosovo.

Just after the allegations over possible bribes were raised, the US Secretary of State, Hillary Clinton, rushed to thank the Maldives for the recognition.

Clinton said the government’s decision greatly contributed to efforts to promote a stable and prosperous future for Kosovo and the Western Balkans.

Meanwhile, Kosovo’s Foreign Ministry does not wish to comment on the issue.

Albana Beqiri, an adviser to the Foreign Minister, Skender Hyseni, said that the ministry wanted to concentrate on its job. “We don’t deal with such speculation”, Beqiri told Balkan Insight.

Pacolli’s party, AKR, says the allegations were coming from the Serbian media, who have been extensively reporting on the matter.

“Serbia wants to say that Kosovo’s recognition is a matter of business and trade rather than a result of our right to self-determination,” he told Balkan Insight

The Maldives, which became the 54th country to recognise Kosovo, is made up of a chain of nearly 1,200 islands, most of them uninhabited, which lie off the Indian sub-continent.

Many Maldivians live in poverty. However, the country has developed its infrastructure and industries, including the fisheries sector, and has boosted health care, education and literacy.