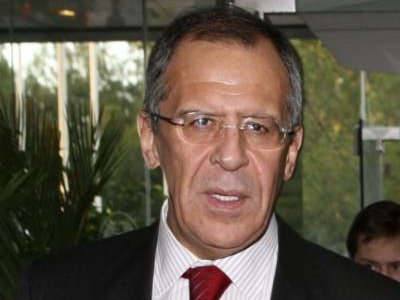 Russian Foreign Minister Sergei Lavrov has dropped plans to attend a meeting of the NATO-Russia Council this month in protest at NATO’s expulsion of Russian diplomats, Russia’s NATO envoy said on Tuesday.

NATO said it regretted Russia’s decision and hoped a new date would soon be agreed for the talks.

Russia had already pulled out of a planned meeting among senior military staff on May 7 in protest at NATO war games that are due to start in Georgia on May 6. A spy scandal resulting in the expulsion of the diplomats has further exacerbated tensions.

“NATO has been informed about the decision,” Russian Ambassador to NATO, Dmitry Rogozin, told state-run Vesti-24 television. “There is no possibility to hold the (Lavrov) meeting under the circumstances.”

Rogozin comments confirmed an earlier Reuters report that the meeting, pencilled in for May 18 or 19, would not be held.

“I would want us to meet on ambassadorial level as soon as possible to discuss one issue, who is interested in pushing our relations several months back,” Rogozin said.

The Russia-NATO council was suspended after August’s Georgia war but the ministerial meeting was to have been the culmination of a gradual restoration in contacts over recent months.

The Belgian government has asked Russia when two diplomats expelled by NATO over a spy scandal will be leaving their posts, a Foreign Ministry spokeswoman said.

NATO, whose headquarters are in Brussels, expelled the two men on Wednesday, the same day the military alliance held its first formal talks with Russia for eight months.

The expulsion row and the NATO war games in Georgia have muddied separate efforts by Moscow and Washington to improve relations soured partially by NATO’s interest in admitting ex-Soviet states like Georgia and Ukraine as members.

Russian President Dmitry Medvedev has complained about NATO’s “muscle-flexing” over the military exercises involving 1,300 troops from the 28-member organisation and partner countries in NATO aspirant Georgia.