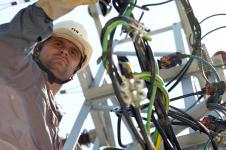 The Austrian power utility company EVN, Wednesday confirmed it has filed a law suit against Macedonia at the Washington based International Arbitrary Court.

EVN is suing the state for impeding their work in Macedonia as the main power supplier. The company has not disclosed damages they are demanding.

“At a press conference held last Thursday, ELEM made it clear they would go ahead with confiscation of EVN’s assets, which prompted us to file the complaint against the Republic of Macedonia in Washington,” the head of EVN’s corporate communications, Stefan Zach said, local Makfax news reports.

ELEM, the state owned company in charge for the power production recently won a local court case and is now demanding payment of about 200 million euros from EVN.

ELEM sued EVN for collecting the old debt from unsettled bills payable by consumers and failing to transfer half of the sum to ELEM as allegedly agreed. EVN filed an appeal claiming this is not true and blamed the court for not taking their evidence in to consideration.

The spat gained wider, political dimension as the key western ambassadors to the country sent a joint letter to the Premier Nikola Gruevski warning him that this could endanger country’s progress towards the EU and prevent further investments in the country. They say that the case questions the independence of the judiciary.

The government at a press conference last week also said that EVN breached the 2006 purchase agreement by failing to invest about 90 million euros in the power grid. EVN denies this too.

Local media mention a possible billion euros sum as compensation, should the country loose the case in Washington. The chance for an early settlement exists only if the local court accepts the appeal and reverses its ruling.