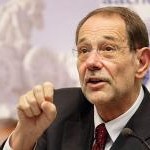 The EU’s foreign policy chief Javier Solana said Wednesday that it is likely that Macedonia gets a date for the start of accession talks this year.

“I think this is very likely and it is very possible,” Solana said in Brussels.

Solana was meeting with Macedonia’s new president Georgi Ivanov, who choose to spend his first full day in the presidential office in European capital, in a demonstration that his presidency will place highest priority on Euro-Atlantic integration.

“With this visit I want to open an agenda for European and Euro-Atlantic integrations, and face all challenges that come as a result of this process,” said Ivanov.

Macedonia has been a EU candidate since December 2005 and is currenty waiting for a date when it can start accession talks with bloc.

Following Greece’s decision to veto Macedonia’s entry into NATO last year over the ongoing dispute over Macedonia’s name, a solution to this dispute must also be found for Skopje to progress.

Ivanov, who visited Brussels together with Prime Minister Nikola Gruevski, expressed hope that a solution can be found following Greeece’s elections due in June.

“After elections in Greece we hope that we will find a partner with whom we’ll come to a solution on the name issue,” Ivanov said.

“The name issue is key problem and after elections in Greece we expect to find a common solution, which is also in our interest,” said Gruevski, echoing Ivanov’s statement. “For a solution there is a need for comprise from both sides,” he added.

However Ivanov stressed that the compromise should be “reasonable and it should not damage the national and state interests”.