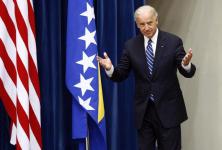 Sharp but tender, blunt but caring, US Vice President Joseph Biden’s speech Bosnia’s Parliament – which was broadcasted live on television across the country – won Bosnians over, local media agreed on Wednesday.

“His entire speech was filled with love for Bosnia and Herzegovina and Sarajevo,” said Sead Numanovic, editor-in-chief of Sarajevo daily Dnevni Avaz, in his comment.

“Historic speech of Joseph Biden: America stays with Bosnia and Herzegovina,” read the title of the front page article in the Sarajevo daily Oslobodjenje.Click here to read the full text of his speech.

US Vice President Joe Biden was preparing to leave Bosnian capital on Wednesday morning, to Belgrade which is the next stop of his three-day Balkan tour. On Thursday, Biden will wrap up his tour with a visit to Pristina.

In Sarajevo, Biden met all top Bosnian ruling and opposition leaders, gave a highly emotional speech in the Bosnian Parliament and eventually visited the US embassy in Sarajevo.

His half-hour speech, which was in effect an address to the Bosnian nation, was jam-packed with clear messages.

“From the podium of the State Parliament, he (Biden) was suggesting and offering more than he was criticising and condemning,” Sead Numanovic said. “He was not as direct as he is known to be, but in the packed hall of the State Parliament it was clear who (was able to) recognise himself in the warnings (given by) the second man in the leading world power.”

If some Bosnian politicians failed to understand (his messages), citizens of Bosnia and Herzegovina certainly did, and in them Biden found yesterday delighted listeners,” Numanovic concluded.

Due to unseen security measures and an almost full communication blackout, very few details were available about the other meetings Biden had in Sarajevo. Most eyes were turned on separate meetings he held with two most radical politicians and archenemies, Bosnian Serb leader Milorad Dodik and Bosniak (Bosnian Muslim) leader Haris Silajdzic.

After meeting with Biden, Milorad Dodik – who over the past months has repeatedly challenged US and EU policies – gave a brief reconciliatory statement expressing his satisfaction with the meeting. He also suggested that there may be a possibility to reach a compromise in undergoing some institutional reforms – which he previously resolutely objected – for the sake of EU accession.

Biden’s visit was, however, partially marred by news that EU foreign ministers announced plans to go ahead with plans to transform the EU’s military mission in Bosnia, EUFOR, to a small training operation, a move that local observers and many diplomats this is much too premature.

This put an awkward dimension to EU Foreign Policy chief Javier Solana’s decision to tour Sarajevo together with Biden, in a move intended to show renewed international resolve for the troubled country.

“Military presence of the EU is still needed in Bosnia and Herzegovina,” reported Mostar daily Dnevni List on Wednesday, quoting several western officials who spoke against EUFOR’s pullout before the situation in the country is completely normalized.

“This is exactly the sort of policy decision, disconnected from the ground reality of a deteriorating political situation in Bosnia, that leads both Bosnian political actors of all stripes and the EU’s allies in peace implementation, especially but not only the US, to doubt the seriousness of the EU,” he said.

“I find it bizarre that the EU and its members can separate what they call a “challenging political environment” from potential security considerations, so much so that they can contemplate giving up a Chapter 7 mandate, which would allow for reinforcement of EUFOR in a crisis. The effect of that would be to give Russia a veto on reinforcement, because it would have to pass through the UN Security Council,” Bassuener said.

“It’s yet another example of the bureaucratic autopilot the EU is on regarding Bosnia,” he concluded.