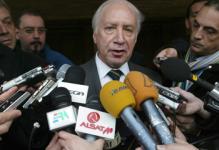 Meetings aimed at solving the “name” row between Greece and Macedonia will resume in Geneva later this month, according to the UN.

“From 22 to 23 June discussions will be held in Geneva,” said Marie Heuze, Director of the United Nations Information Service in Geneva in a press release to local media over the weekend.

The last meeting took place last October. Negotiator Mathew Nimetz tabled a set of ideas for solving the long running row. It was unclear whether either country agreed to any of them.

It is thought he offered several variations of the name “Northern Macedonia” as a possible new name for Macedonia.

Skopje and Athens have been at loggerheads since the early 1990s when Macedonia declared its independence. Greece claims Macedonia’s chosen name clashes with that of the Greek northern province and implies its northern neighbour has set it sights on claiming that land.

Tensions escalated last year when Greece, a long-time NATO and EU member, blocked Macedonia from entering NATO. Greece said it will use similar rights in the UN pending resolution of the dispute.

It is thought that Nimetz will visit both countries shortly after the initial meeting.

Macedonia’s Prime Minister Nikola Gruevski reiterated that citizens will have the final say in a referendum should any compromise be reached during the talks.

Opponents to a referendum argue that this hinder efforts towards a solution as people are likely to vote with their hearts and not their heads.

Experts suggest the United States, who are seen as an important catalyst to the talks, would like to see the issue resolved by the year’s end to enable Macedonia’s entrance into NATO in 2010.