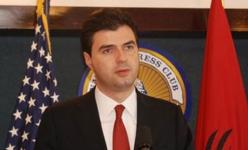 Albania has made huge progress despite missing targets to qualify EU visa-free status by the end of the year, according to the country’s foreign minister.

“The commission has recognized that Albania is progressing at full speed toward the government’s major goal, lifting visa restrictions within 12 months,” said foreign minister Lulzim Basha.

“This is in recognition of the great reforms undertaken by the Albanian government,” Basha added.

The EU Council of Ministers meeting in Luxembourg have green-lighted the European Commission’s scheme of removing visa restrictions for countries in the Western Balkans who meet their criteria.

Macedonia is rated as fully complying with criteria; Serbia and Montenegro are also close, while Albanian and Bosnia fall way behind.

The opposition sees the country’s progress through a different lens and has widely criticized both the foreign minister and Prime Minister Sali Berisha for falling behind in the visa liberalisation process.

“The Berisha government has also failed to fulfill the standards regarding human rights, especially for minorities like the Roma,” he added.

Former Prime Minister Ilir Meta, now the head of the Socialist Movement for Integration, LSI, has also criticised the government.

“The EU has clear standards, which it has set forward for the visa liberalisation process,” said Meta

“There is no harsher strike to the practices of the Berisha government than what has happened at the EU. The visa liberalisation process is a question of standards and not political lobbying,” he added.

Post Views: 140
Previous EU Visa Restrictions To Be Axed
Next War Criminals May Serve Out Sentences in Slovenia