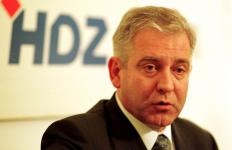 Talks aimed at settling a border dispute between Slovenia and Croatia broke down on Thursday, raising doubts over Croatia’s bid to complete its EU accession talks by the year’s end.

EU-member Slovenia has blocked progress in Zagreb’s accession talks due to a land and sea border dispute dating to the 1991 break-up of the former Yugoslavia.

“We can’t accept that,” Sanader said, saying the Slovenian amendments were fundamental changes to the original proposal.

Sanader suggested two alternative solutions but Slovenian Foreign Minister Samuel Zbogar said it was not appropriate to circulate new proposals when another was on the table.

“Regrettably, the parties were not able to make progress on these points today,” a spokeswoman for EU Enlargement Commissioner Olli Rehn said.

The dispute involves Slovenia’s demand to have direct access to international waters in the northern Adriatic, which it shares with Croatia and Italy, and several villages on the northern Istrian peninsula.

Croatia is the only ex-Yugoslav republic to open accession talks so far, apart from Slovenia who are already EU members. Due to the Slovenian position, it is racing against time to complete the talks by the end of this year.

Slovenia argues that some of Croatia’s accession documentation were prejudicial for the outcome of the row.

Slovenian Foreign Minister Samuel Zbogar said he thought it would be “very difficult” to reopen negotiations this month or next as Croatia is seeking.

Croatia’s EU bid has also been clouded by problems in cooperation with the Hague war crimes tribunal Chief Prosecutor Serge Brammertz who says Zagreb has so far failed to track down war documents he needs for trial.