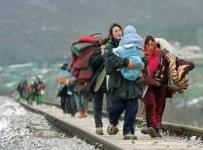 The UNHCR has identified Serbia as one of the top five countries with a recurring refugee crisis.

At a UNHCR meeting held in Vienna today, Serbia’s UNHCR representative Lennart Kotsalainen stated that fourteen years after the war in the Balkans, “a great number of refugees still live in Serbia, which is why the UNHCR has decided to include the country on the list of five that we need to pay special attention to.”

“That problem needs to be addressed now,“ underlined Kotsalainen, identifying the economic crisis as a possible deterrent to Serbia committing resources to help these displaced people.

On a more positive note he claimed that Serbia, Croatia, Bosnia-Herzegovina had resolved most major disputes over refugee issues.

“What’s more, that theme is very high on the list of priorities of the current Serbian government, more so than was the case in the past,“ he stressed.

The UNHCR statistics are alarming. Serbia houses 100,000 refugees from Croatia and Bosnia-Herzegovina. Although numbers have come down from 500,000, the rate is still too high.

In the interim period of assessment, 200,000 received Serbian citizenship, and some have been returned to their homes.

The refugees that cannot or do not wish to return home are ones the UNHCR have identified as a target group. The Serbian state lacks resources to fully integrate them into society.

Many refugees have not pursued Serbian citizenship, afraid that they may lose their pension or rights in Croatia.

Kotsalainen is pushing to have these problems resolved sooner than later.

His first priority is to sort out assistance to the 1,300 refugees who still live in collective centers.

“They’re the most vulnerable, and a solution for them must be found as soon as possible,“ he emphasized.