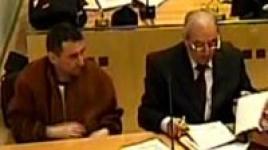 “I fired a single burst, but not to the end. I moved on the sides, careful not to hit any members of the special response team. I did not use the reserve clip. There was no need… The people were disappearing…”

These are the words used by Damir Ivankovic to describe the execution of around 200 civilians at Koricanske stijene on August 21, 1992, a crime in which he was an accessory.

Ivankovic added that after the execution, he was ordered by “Dado Mrdja” to go down the slope and look for survivors.

“I saw some wounded people down there. I recognized one of them, little Susic. He begged me to kill him, but I could not. I just gave him my gun to kill himself and left,” said Ivankovic, admitting his portion of guilt in the crime.

He said he participated in the murder of “around 70 or 80 people”.

In his testimony, Ivankovic said he saw that Zoran Babic, Milorad Skrbic and Ljubisa Cetic, also charged before the Court, participated in the execution.

They are charged, together with Goran Djuric, Milorad Radakovic, Dusan Jankovic and Zeljko Stojnic, all members of the Prijedor police station and special response team of the then police, with the crime at Koricanske stijene when around 200 civilians from the Prijedor area were murdered.

Ivankovic became a member of the special response team on May 30, 1992, “after the Bosniak attack on Prijedor”, but before he joined, as a Croat, he had to sign a “paper on loyalty to new Serb authorities.”

He said that the special response team guarded the convoy used to “expel Bosniaks, Croats and other non-Serbs from Prijedor.”

“The people we guarded were robbed by us from the special response team. Commander Miroslav Paras was ordered to do it by someone from the top and it was usually handled by Dado Mrdja. Everyone was afraid of him. People were given out bags and afterwards all that would be handed back to him. Later they would sometimes send us around 100 marks, but everything else ended up with chief Simo Drljaca,” Ivankovic said.

Paras and Drljaca have since died; Darko Mrdja was convicted of a war crime and sentenced by the Hague Tribunal to 17 years in prison.

According to Ivankovic, the last convoy he escorted set off on August 21 towards Travnik.

“They announced it over media, there was only Radio Prijedor at the time, that everyone who wants to leave can do it from the village of Tukovi,” Ivankovic said.

“We from the special response team reported to the police and they transported us to Tukovi in several tours. There was a lot of people there, Bosniaks, Croats, even Serbs who came to say goodbye… I saw Dule Jankovic arrive in a police Golf. Commander Paras told us to find a seat, everyone should go to a bus or truck. People entered old city trucks and buses, there were 14 or 15 of them. There must have been 1,500 people there,” said the defendant, adding that he saw all the co-defendants in Tukovi.

After we set off, the convoy was detained for the first time at the intersection near Kozarac, “so that four buses from the Trnopolje camp could join the convoy.”

“After that, we stopped on several occasions. It was very hot, so we stopped and pulled the cover off the truck so that people could breathe. When we stopped near Karanovac, I went outside and was approached by Mrdja, who gave me a bag to rob people. I threw the bag in the back but never asked for it. It was done by Mrdja at the last stop and he was furious when he saw how little money was in it,” said the defendant.

He said that the convoy stopped for the last time between Knezevo (Skender Vakuf) and the village of Imljani. He saw two buses with 70 or 80 civilians in each, sitting with their heads down.

“We stopped, my truck was among the last. Mrdja came, took me down and took the bag. After that, he pointed to some people, and they had to leave my truck and enter the bus. I immediately knew that something’s wrong, because it has never happened before that they were separating men,” said Ivankovic.

He said that 12 or 13 members of the special response team, among them Paras, Mrdja, Babic, Stojnic, Cetic, Skrbic and Djuric, stood by the two buses with prisoners.

“Mrdja ordered that we all get on the bus. People were already crammed in there, in each of them there was already around 80 people, they were told it is an exchange, but it was cleat that it would not happen. Instincts worked in those occasions and I knew they are finished. Together with me, Mrdja, Paras, Babic and Cetic entered the truck,” Ivankovic added.

After fifteen minutes of driving, he said, the buses stopped, and prisoners were ordered to get out and stand in two columns by the rock.

“Paras and Mrdja consulted for a while, and then Mrdja ordered the people to line up by the abyss and bow their heads. Then I knew the people would be executed. I started arguing with Mrdja about it, I refused to do it, but he told me if I don’t want to do it, to put down my weapon and join them. When the people were ordered to stand by the abyss, it was incredible, it cannot be described…” said Ivankovic.

The shooting lasted around fifteen minutes, because the prisoners were jumping by themselves on sharp rocks.

Replying to direct questions from the Trial Chamber, Ivankovic said that he saw Skrbic and Ljubisa Cetic shooting.

Ivankovic added that he heard bursts and shots from the second bus, around 100 metres further away.

“I heard the shooting from the upper group. First I heard just a couple of shots, and later even two detonations. It lasted around 15 minutes,” said Ivankovic, adding that he did not know whether defendants Stojnic and Djuric were in the escort of the second bus, he did not saw what happened there.

“When I got back up, we returned to Knezevo. I saw Dusan Jankovic passing by in a police Golf and it surprised me, because he never went with us,” said the defendant.

Upon returning to the Prijedor police station, the special response team was “scolded by the chief Sima Drljaca“ for what they did, and as punishment they were sent in September 1992 to army duty.

At the end of his testimony, Ivankovic expressed remorse and apologised to families of victims.

“I want to express my sincere regret. I am sorry for everything that was done. I feel truly sorry for all the victims and families who lost their loved ones,” he said.

After Ivanokovic’s testimony, the Trial Chamber accepted the plea bargain, under which he may expect a sentence of between eight and 15 years in prison.

The verdict will be announced on Thursday, July 2.

Post Views: 205
Previous Bosnia Hopeful over IMF Deal
Next Over 230 OSCE observers to monitor parliamentary elections in Moldova on July 29