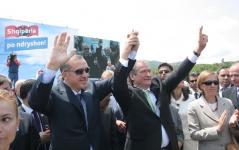 The Albanian Transportation Ministry has announced the temporary closure of the Thirre tunnel in the Rreshen-Kalimash road, one of the key segments of the Albania-Kosovo highway.

The 5.6-kilometre tunnel will be closed from Monday till Thursday, with crews continuing construction work, which cannot be carried out with traffic passing through.

The breakthrough of the tunnel of the new highway connecting Albania and Kosovo was inaugurated in early June with a celebration ceremony attended by Kosovo Prime Minister Hashim Thaci and Albanian Prime Minister Sali Berisha.

The milestone, which was transformed into an electoral rally by the Albanian leader ahead of the June 28 parliamentary poll, saw deputies from both countries and hundreds of supporters congregate in the tunnel in a show of unity between the two sister nations.

The Rreshen-Kalimash road, although not yet completed, was also inaugurated in an electoral stunt on June 26, by Prime Minister Berisha and his Turkish counterpart, Receep Tayyip Erdogan.

Albania’s largest public works project in decades, the four-lane highway is expected to strengthen the already deep ties between Albania and Kosovo, where more than 90 per cent of the population of 2 million is of Albanian descent.

It will make travel for hundreds of thousands of Kosovars who cross the border to take their summer holidays in Albania each year much easier.

The road has been dubbed the “patriotic highway,” reflecting the widely perceived geopolitical motives behind the project – and the fact that no feasibility study was ever undertaken into the possible return on investment for the massive undertaking. Corruption allegations and cost overruns have led many to question the ultimate value of the highway’s construction.

According to a study of the High State Auditing Office seen by Balkan Insight, the highway could take as many as 180 years to return its one billion-plus euro cost; however, the centre-right government of Prime Minister Berisha says it will return its investment in six years.

Last November, following a 17-month investigation, Albanian Prosecutor General Ina Rama indicted Foreign Minister Lulzim Basha on charges of abuse of office in connection with the tender for the highway.

Rama said the deal with Bechtel-Enka to build the most challenging portion of the road, the 61-kilometre stretch from Rreshen to Kalimash, had cost the country hundreds of millions of euros more than originally necessary.

The charge related to Basha’s tenure as transport minister from 2005 to 2007. The prosecutor maintained that Basha and his then-chief legal aide, Andi Toma, illegally favoured Bechtel-Enka.

The minister allegedly allowed construction to begin before the blueprint for the work was finished and in breach of Albanian law on open public tenders. He allegedly accepted a much higher price per work unit than was charged for similar projects elsewhere.

The price tag for Bechtel-Enka’s work, which covers a little more than one-third of the highway’s full length, has leaped from 416 million euros in the initial contract to more than 1 billion euros, according to prosecution charges.

Prosecution experts and the state auditing office say the Transport Ministry’s wrongful action cost Albanian taxpayers between 114 and 232 million euros, depending on the method used to calculate the cost.

However, on April 10, the Supreme Court dismissed the charges on a series of technicalities, arguing that Basha had not been indicted properly last November.

“This is the end of a political process and the end of the plot against the highway,” a relieved Basha told reporters outside the courthouse, blaming an international conspiracy between Serbian spies and the opposition for the charges.

The ruling has been harshly criticised by legal experts, however. And despite the ruling, the case against the minister is not over. Prosecutors have appealed the case and a new ruling from the Supreme Court is expected. However, because of the political sensitivities of the weight put in defence of the minister by PM Berisha and his Democratic Party, few local observers believe that the case will be ever sent to trial.

While the Rreshen-Kalimash section of the highway has cost Albania over one billion euros, according to the charges filed against Basha, this is not, of course, the total cost of the highway to Kosovo.

The Rreshen-Kalimash section is only a part of the 170-kilometre route. The Albanian government refuses to give an exact estimate of the total cost of the project.