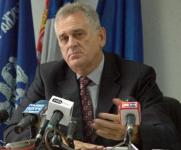 The Opposition Serb Progressive Party, SNS, will open a Council for EU Integration, Tomislav Nikolic, leader of the party, announced on Thursday in Brussels.

Nikolic met in the EU capital with European Enlargement Commissioner Olli Rehn and EC Director for Western Balkans Pierre Mirel to discuss ways in which the EU could help Serbia overcome the effects of the economic crisis.

In an interview with the Belgrade daily Politika, the SNS leader said that he was the first Serbian politician invited to a meeting by Olli Rehn.

“We discussed everything Serbian citizens have done to ensure Serbia’s progress toward the EU,” Nikolic told the newspaper.

Nikolic also said that he had “received firm assurances from EU senior officials that they will not ask Serbia to recognize Kosovo’s independence in order to continue the integration process.”

According to the party statement, the most important foreign policy goal for Serbia at the moment is the fight for foreign investments, especially from the EU.