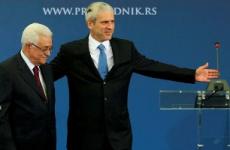 At a meeting in Belgrade, the Presidents of Serbia and Palestine, Boris Tadic and Mahmoud Abbas stated that a peaceful and final settlement of the Middle East Crisis can only be reached by negotiation, and ruled out the imposition of any kind of solution.

Speaking at a press conference, Abbas said he believed Serbia could contribute to a solution to the Middle East conflict and underlined what he said was the traditional longstanding friendship between the Serbian and Palestinian peoples.

“We want our problems to be solved through international law. We also aspire to peace and respect international norms, but imposed settlements are unacceptable,” said Abbas.

Echoing his comments, Tadic said that Serbia considers the Palestinian issue of key importance for Middle East stability. He said that Serbia felt that once negotiations between Palestine and Israel are concluded, the neighbouring countries should live in peace.

This is the first visit by a Palestinian leader to Belgrade in 20 years. Abbas’s predecessor, Yasser Arafat, visited Belgrade for a summit of non-aligned countries in 1989.