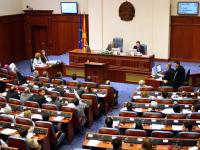 The reshuffling of the Macedonian government led by centre-right Prime Minister Nikola Gruevski will be verified in Parliament on Friday.

Parliamentary Speaker Trajko Veljanoski expressly set the session for the dismissal and appointment of ministers after several members of Gruevski’s team on Wednesday resigned and one was dismissed in what the media called a quiet government reshuffle.

The appointment of new ministers is expected to go smoothly, as Gruevski, who is also leader of the main ruling centre-right VMRO DPMNE party, has a firm majority in Parliament.

Stojanovski in his resignation notice said he regretted his failure to keep politics away from schools. Spasenoski noted that he was stepping down in order to honour a deal between the government parties, while Delev cited personal reasons.

Only Slaveski, who yesterday seemed caught by surprise, announced he would address parliament about his replacement.

The post of deputy prime minister in charge of European affairs remained vacant after Ivica Bocevski submitted his resignation last week. He then only noted that his “contribution to the current government is fully exhausted”. Media, however, speculate that a break-down in personal relations with the prime minister was behind the move.

The head of Skopje’s Cadastre Office, Nikola Todorov, will be the new education minister. Deputy Prime Minister Zoran Stavreski will be the new finance minister, and will retain his old post. Vasko Naumovski is to be the new deputy prime minister for European affairs.

Vladimir Pesevski, director of the Small Enterprise Assistance Funds, SEAF, in the country is to fill the newly opened post of deputy prime minister for economy.

The opposition responded by saying that the reshuffle was insufficient since the entire government is responsible for poor results in tackling the effects of the global economic crisis and for the slow pace of reforms needed for the country’s EU accession.