Serbia Opts Out of Croatia Summit 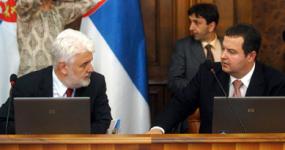 According to the HRT website, the reason for Jeremic’s refusal to take part in the summit was a misunderstanding over the arrangement regarding Kosovo’s participation.

“We made a precise arrangement with Croatia summit organizers, which the Croatian side turned down, forcing us to cancel our arrival unfortunately,” Jeremic told HRT, without providing any details of the arrangement to which he eluded.