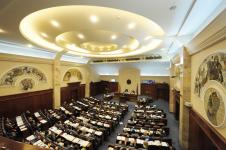 Leaders of the main Macedonian parties have agreed on several key issues regarding the adoption of reforms needed for the start of EU accession talks.

Meeting late on Friday, the party leaders attuned their positions concerning a law mandating parliamentary reforms and on changes to the law on financing political parties. Both laws require a two-thirds majority in order to pass. They also agreed to push for the application of a law on the official use of languages.

Facing a tight EU reform schedule, the leaders pledged publicly to form inter-party groups to swiftly iron out misunderstandings and differences. The parties also said their legislators will reduce their summer vacations so that the necessary laws can be enacted by September 15.

It is then that the European Commission, EC, will start writing its annual progress report on Macedonia, which will be issued in October. Skopje hopes the report will include a recommended date for the start of accesion talks, but the EC has warned that this will only be the case if Macedonia fulfils all the necessary reforms to synchronise its legislations with EU standards.

During his visit to the country on Thursday, EU Enlargement Commissioner Olli Rehn urged a speedy wrap up of Macedonia’s reform process, which includes changes to the judiciary, policing and public administration, in the next two months in order for the country to have a chance to secure the desired date.

“It is now becoming clear that we have a chance of getting the date,” PM Nikola Gruevski told local media after the talks. He said the government is ready to make its utmost effort in this regard.

If Macedonia falls short, this would be the fourth year in a row, since the country became an EU candidate state in 2005, that it has failed to meet the necessary criteria for the initiation of accession talks.