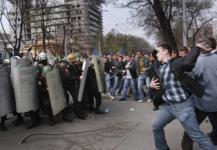 Bucharest is waiting expectantly for the results of today’s Moldovan elections, which could help determine whether the former-Soviet republic remains in Russia’s orbit.

Polls suggested the ruling Communist Party was leading with around 31 percent, but analysts said that four pro-European parties could win a combined 33 percent and form an alliance to elect the country’s next president, shifting the country toward the west.

Moldova has been in political paralysis since April 5 parliamentary elections sparked violent protests, with the opposition claiming the ballot was faked.

Relations between the neighbouring countries have deteriorated since Moldova’s Communist government accused Romania of inciting riots that occurred in the wake of the contested April elections.

Post Views: 187
Previous Albania Boosts Afghan Deployment
Next Voters in Corjova will cast their ballots in Ustia and Cocieri