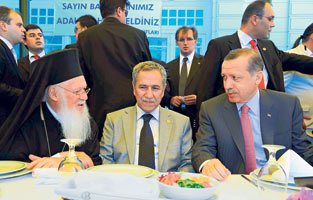 The ruling Justice and Development Party (AK Party) plans to make major progress in the completion of the main aspects of the Kurdish initiative before the European Union — which Turkey aspires to join — releases a progress report on Turkey’s membership efforts in autumn. The ruling party wants to finalize the plan by the end of the year.

Having met with political parties, nongovernmental organizations, leading businessmen and academicians to discuss the settlement of the Kurdish issue, Interior Minister Beşir Atalay aims to come up with a draft democratization package, an initiative which is strongly opposed by the main opposition Republican People’s Party (CHP) and the Nationalist Movement Party (MHP). The government is considering the inclusion of several arrangements to improve the rights of non-Muslim minorities in the democratization package, but whether these arrangements will also cover the reopening of Halki Seminary on the island of Heybeliada off İstanbul is not yet certain.

Prime Minister Recep Tayyip Erdoğan met with the leaders of the major non-Muslim minorities over a luncheon at the Anadolu Club on Büyükada on Aug. 15, thereby taking a great step toward making the demands of these minorities part of the democratization package.

The fact that Deputy Prime Minister Bülent Arınç, State Minister and Turkey’s Chief EU Negotiator Egemen Bağış, Education Minister Nimet Çubukçu, State Minister Faruk Çelik and Culture and Tourism Minister Ertuğrul Günay also attended the meeting and that the areas of operation of these ministries are closely related to the rights of non-Muslim minorities is seen by many as an important indicator of the further enlargement of the scope of the democratization package to include these rights and demands.

Speaking to Today’s Zaman, the deputy chairman of the AK Party’s parliamentary group, Bekir Bozdağ, stressed that the package for which the government is preparing a roadmap is a democratization package. “Some may prefer to call it the ‘Kurdish package,’ or the ‘Kurdish initiative,’ but for us this is a democratization package. This package will comprise the rights of all 72 million Turkish citizens. Everyone will benefit from this package in line with the constitutional principle of equality,” he said, implying that some demands from the non-Muslim minorities would find room in the package.

Will the government provide for the reopening of the Halki Seminary in the democratization package as demanded by the patriarchate? It is hard to give a clear answer to this question at this stage. However, the government is more likely to offer another solution concerning the Halki Seminary. In the past, it was suggested that the seminary might be subordinated to the Education Ministry or the Higher Education Board (YÖK), but the patriarchate did not accept it.

Last year, the prime minister stated that the Halki Seminary might be reopened if Greece agrees to expand the rights of Turkish minority in the western Thrace. Currently, it seems that government will not stress the principle of reciprocity with respect to the rights of non-Muslim minorities.

The government plans to complete the democratization package by the beginning of 2010. By making significant progress with the package before the next EU progress report in November, it seeks to secure the support of the EU. Prime Minister Erdoğan disclosed that the package, which has yet to be finalized, will contain short-, medium- and long-term targets. Aware of the complexity of the issue, the government is wrestling to develop a strategy that can be implemented gradually. “The package will accommodate steps that will be implemented in the short-, medium- and long-term,” Atalay had previously said. The final stage of the long-term targets of the package will be a new constitutional amendment and a brand new definition of citizenship in the Constitution. The statements made by the US administration suggest that a new definition of citizenship will greatly solve the problem.

A special team of experts working under the chairmanship of Atalay are gathering information obtained during the minister’s talks in a common pool. They are also analyzing how the countries faced with similar problems have settled them in order to assist Atalay and Erdoğan make their decisions in a more informed manner.

An academician who is a member of this team told Today’s Zaman on the condition of anonymity that they have been concentrating on how Spain and the UK have settled their problems with ETA and the IRA respectively, maintaining that as these countries are EU members, they can provide a good model for Turkey. Also acknowledging the unique qualities of Turkey, he pointed out that they are trying to come up with a model that is specific to Turkey.

Call on Öcalan to keep silent

The roadmap that the leader of the terrorist organization Kurdistan Workers’ Party (PKK) Abdullah Öcalan had previously declared would be made public on Aug. 15 will most likely to be disclosed during this week. Meanwhile, a group from the pro-Kurdish Democratic Society Party (DTP) reportedly sent a message via to Öcalan through his lawyers, requesting that he not disclose his roadmap to the public.

Öcalan is expected to complete his roadmap today and convey it to his lawyers on Wednesday.

For some DTP deputies, even if Öcalan discloses his roadmap, this will not contain demands much different from their own. Stressing that Öcalan is also in favor of a settlement within the unitary structure of the state, DTP Şırnak Deputy Hasip Kaplan said to Today’s Zaman: “We believe that the settlement will respect the unitary structure [of Turkey]. Kurds do not wish to separate. The views Öcalan will make public are anxiously waited for by the people of the region. I don’t think that the DTP and Öcalan will make different suggestions.” However, according to Öcalan’s lawyers, Öcalan has not warmed to the idea of the disarmament of the PKK at this stage. However, he is said to have extended the decision not to conduct any attacks until the roadmap is drawn up.