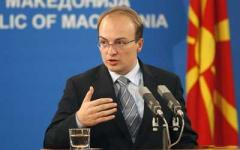 Milososki’s comments came in an interview with Reuters on Monday, held on the sidelines of a regional security conference in Slovenia.

“The only shift was for the worse in Greece’s attitude. They have toughened their position. We are concerned [at the] possibility of a second Greek blockade related to our opening EU accession talks,” Milososki said

He said talks with Greece had resumed with “new dynamics” this year and that Athens appeared to have toughened its stance since the 2008 NATO summit.

“We in Macedonia are ready […] to come to a solution. It is worth noting that there has never been a single security incident between Macedonia and Greece, while trade, investment and tourism are improving. Business people are more pragmatic than the government,” he said.

Last year Athens blocked Skopje’s NATO acession process, insisting that the country change its formal name, Republic of Macedonia, before joining the alliance. Greece argues that Macedonia’s name implies that Skopje maintains territorial claims on its northern province of Macedonia. Athens has warned that it could also move to stymie Skopje’s EU accession if the row is not settled.

Milososki believes that the risk of a fresh Greek veto is heightened by the shaky internal political situation in Greece. There is speculation that Greece could be going to early elections, which would put the government of Premier Kostas Karamanlis to the test. Milososki fears that this could prompt Karamanlis to harden his stance in the naming dispute for domestic political gain.

Milososki said he hoped that the UN mediator in the dispute, Matthew Nimetz, will soon come up with a new compromise proposal.

Last month, both countries conveyed their official replies to Nimetz’s most recent proposals for settling the spat. There has been considerable speculation in the media that variations on the name Northern Macedonia were proposed by the UN mediator as a potential compromise solution.

In the last two months, several high-ranking EU and US officials have reiterated that the time is right to settle the long-standing quarrel, which dates back to the early 1990s when Macedonian declared its independence from the former Yugoslavia.