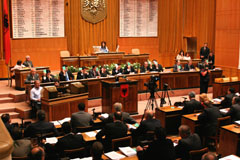 The election-winning Democrats secured 70 seats in the 140-seat parliament, the Republican Party and one of the exiled Albanians from Greece secured one seat each. The opposition Socialists won 66 seats, with 4 seats going to the Ilir Meta’s Movement for Socialist Integration.

The opposition Socialists said they will boycott the parliament, blaming the officials of election fraud.

The governing coalition is made up of Prime Minister Sali Berisha’s Democratic Party, which recently struck a deal with Ilir Meta’s party to form a coalition. The Republican Party joined the pact.