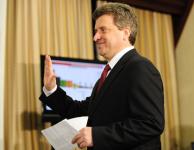 Macedonia has never abandoned the so-called double name formula as a solution to its unresolved name, there have been only different interpretations of that position, the country’s President Georgi Ivanov said Tuesday in New York.

Ivanov said this after holding meetings in New York with NATO Secretary General Anders Fogh Rasmussen and Dutch Prime Minister Jan Peter Balkenende, where amongst other things the name issue was discussed.

“In Macedonia someone is creating a notion that we are backing Greece’s position on a name for general use. Macedonia has never had such a stance,” Ivanov said, the local MIA news agency reported.

The double name solution, that Greece has consistently rejected, foresees the country using its constitutional name Republic of Macedonia in all relations aside from relations with Greece.

Athens insists that the new name should be universal, arguing that the current name implies Skopje’s territorial claims towards Greece’s own northern province of Macedonia.

Last year Greece blocked Macedonia’s NATO accession over the row and threatened to do the same with the country’s EU aspirations pending a solution.

The Macedonian government yesterday held back from commenting on the latest allegations by the Greek Foreign Minister Dora Bakoyannis who said she is not convinced that Skopje will get a date to start its EU accession talks from the European Commission this autumn.

The two countries are engaged in long standing UN talks aimed at finding a solution to Macedonia’s still unresolved name.