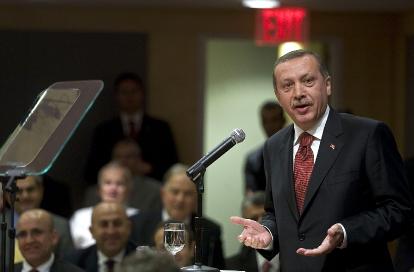 The parliamentary discussion over the recently launched Kurdish initiative will be held during an open session, Prime Minister Recep Tayyip Erdoğan said late Tuesday, ending the controversy that prompted harsh criticism from the opposition.

“It will be an open session, and everyone will be able to listen to what is discussed,” Erdoğan told reporters on Tuesday in New York City, where he is attending the United Nations General Assembly meeting.

After opposition parties refused to meet with the government about the initiative, the ruling party offered to convene a closed session of Parliament to inform lawmakers about the process. But both the Republican People’s Party, or CHP, and the Nationalist Movement Party, or MHP, objected to the idea, saying that they would not support a closed meeting. MHP Devlet Bahçeli went further, threatening the government that he would illegally disclose the contents of a closed session.

The open-session debate is likely to take place in early October after Parliament resumes its legislative work. According to ruling party officials, Interior Minister Beşir Atalay, the government’s Kurdish-move coordinator, will speak to Parliament and respond to the oppositions’ questions.

“They returned from a mistake,” CHP senior official Hakkı Süha Okay told reporters Wednesday. “It’s an important step for them but what is more important is what they are going to say.”