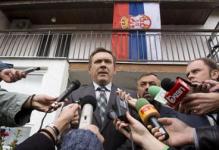 Serbia’s Minister for Kosovo Goran Bogdanovic said that Serbs who plan to vote in Kosovo’s local elections this Sunday should ask themselves whether they are helping Belgrade ”save” Kosovo by doing so.

Bogdanovic said that: ”Those Serbs who would take part in the elections should ask themselves whether they are helping the state of Serbia save Kosovo or weighing down on our fight to preserve our sovereignty and territorial integrity.”

“We cannot deprive anyone of their democratic right to vote and we don’t want to, but we are sending a clear message that there are no conditions for Serbs to vote in the elections because they (the elections) are against (UN) Resolution 1244,” the minister said.

He noted that these are the first elections in Kosovo that are taking part outside the UN’s Resolution 1244, which outlined Kosovo’s status as a Serbian province in 1999, prior to Pristina’s decleration of independence nearly two years ago.

According to the Fonet news agency, a survey carried out by non-governmental organisation Kontakt shows that 28 per cent of the Kosovo Serb population will participate in the elections.

A member of the NGO’s Kosovo branch, Fatmir Sheholli, said that the survey was conducted in the town of Gracanica where 125 persons were questioned. Forty per cent of the questioned are undecided, while 32 per cent are against participation.

Speaking in the BIRN Kosovo show Life in Kosovo, the Serbian Interior Minister Ivica Dacic said that Kosovo Serbs will not be punished for voting in the local elections but that he couldn’t encourage them to vote, as this would indicate recognition of Kosovo’s independent institutions.

However, a group of citizens that includes Serb representatives of the intellectual elite appealed Monday to Kosovo’s Serb community to take part in the forthcoming elections.

The EU Special Representative in Kosovo, Pieter Feith, also called on last week on all the Kosovo residents, especially Serbs in Kosovo, to take part in the elections.

In an interview with Beta news agency, Feith said that if the local Serbs do not participate in the elections, they could risk losing control of the local governments in municipalities and territories in which they make up the majority population.