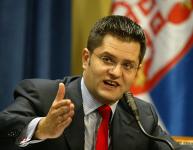 Serbian Foreign Minister Vuk Jeremic has announced that Serbia will submit its EU candidacy request by the end of the year, with aim of joining the EU in five to seven years.

In an interview for the European Parliament’s official website, Jeremic said that, according to the latest polls, 70 per cent of the Serbia’s population favours joining the EU.

“It’s very difficult to imagine a stable, peaceful and prosperous part of Europe that has a big black hole right in it. I am an optimist and I hope the entire Western Balkans is going to accede to the EU in this generation,” the website quoted him as saying.

He added that Serbia will contribute towards peace and stability to the EU, and contribute positively to its cultural legacy and customs.

When asked whether opinion polls changed when many EU countries recognised Kosovo, the minister said that the Serbian government has managed to compartmentalise the issue with those EU partners.

Speaking of the relations between Serbia and the European Parliament, Jeremic said that Serbia is looking forward to working very closely with the institution.