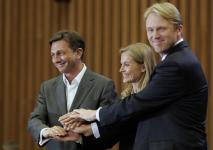 Slovenia’s ruling coalition parties have joined opposition parties in calling for a referendum on a border deal agreed with Croatia.

The four ruling parties as well as Prime Minister Borut Pahor and President Danilo Turk have decided to support the opposition initiative and said on Tuesday they will only ratify the border agreement if it secures majority support in a referendum, expected in early 2010.

Given the breadth of support, a referendum now seems certain.

The move may again complicate Zagreb’s bid to join the EU, since Slovenia has blocked Croatia’s EU entry negotiations pending a solution to the 18-year-old dispute.

Pahor and his Croatian counterpart Jadranka Kosor last week signed an agreement whereby an international arbitration team will settle the disagreement over the sea and land border between the two countries. The two agreed that the ruling would be binding to both countries.

Pahor has made a resolution to the broder dispute one of his main foreign policy goals, but he has faced pressure from opposition parties who oppose the agreement to call a referendum. They accuse Pahor of yielding to international pressure too easily and not agreeing to take enough time to consult on the agreement.

Nevertheless, the ruling parties are confident they can win. According to Reuters, a recent opinion poll showed 48.5 per cent of citizens would support the agreement while 14.6 per cent were undecided.