Russia moves to cut Ukraine out of gas supply route 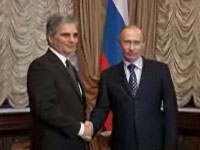 Russia and Austria have agreed to move swiftly on a pipeline deal that would cut Ukraine out of the gas supply route. At a meeting in Moscow, Austrian Chancellor Werner Faymann expressed his support for the Russian South Steam pipeline. Russia is keen to cut-out Ukraine after allegations of theft.

Russia is trying to persuade its European customers to use one of its two pipelines with routes that bypass Ukraine – Nord Stream or South Stream. However, Ukraine has reassured its neighbour that there will be no illicit siphoning.

“If cooperation continues, we can guarantee that under no circumstances will we break our obligations to the EU in terms of transporting gas. We will strictly observe our contracts. Ukraine will not break its obligation to Russia. We will pay for natural gas that has been used by us”

Europe receives about 20 per cent of its gas from Russia. A repeat of a dispute last New Year with Ukraine could once again leave thousands feeling the cold. The EU is backing an Austrian project, in a bid to cut dependence on Russian gas.