Serbia’s Patriarch to Be Buried Today 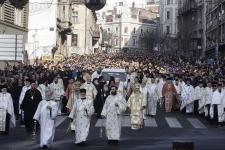 Orthodox Christian believers are gathering in Belgrade today to attend the funeral of the Head of the Serbia’s Orthodox Church Patriarch Pavle.

Holy Liturgy was served this morning at 7.30 by Ecumenical Patriarch Bartholomew I at the Cathedral Church of St. Michael the Archangel in Belgrade.

A funeral procession will be led to the St Sava Memorial-Church on Vracar where the funeral service will be held at 11am. The burial will take place at the cemetery of the Monastery Rakovica, in Belgrade as Patriarch Pavle had expressed his wish to be buried there several times and also wrote it down in his testament.

After the funeral service, Metropolitan Amfilohije, Concierge of the Throne of the Serbian Patriarch shall deliver a speech. The Patriarch of Constantinople Vartolomey and Serbia President Boris Tadic are also supposed to deliver a speech on the occasion.

The bells of Serbia’s churches rang out Sunday morning to mark the death of Patriarch Pavle, who passed away at the age of 95. He died at the Belgrade military hospital, to which he was admitted on 13 November, 2007, due to poor health.

The patriarch’s body was then carried and displayed in an open coffin at Belgrade’s Cathedral Church. The Serbian government proclaimed on Sunday three days of mourning during which a large number of people waited in long lines in front of the Cathedral Church of St. Michael the Archangel in Belgrade to pay their last respects to the patriarch.

Speaking at a press conference on Wednesday, Bishop Irinej said that presence at the funeral has been confirmed by Ecumenical Patriarch Bartholomew, Albanian Patriarch Anasthasios, Bishop of the Orthodox Church of the Czech Countries and Slovakia Christopher, Romanian Patriarch Daniel and senior church dignitaries which include the bishop heading the Jerusalem Patriarchate, Alexandria Patriarchate and a delegation of the Russian Orthodox Church.

Bishop Irinej expressed regret over that fact that Rakovica Monastery cannot host all of the people.

According to the Patriarch’s explicit wish, the Holy Synod of Bishops appealed to all the faithful not to bring wreaths to the funeral service, but instead to give money for the completion of the Memorial Church of St. Sava in Vracar.

The Serbian government recommended all employers in Serbia to grant their employees a paid day off on the day of the funeral. The same recommendation was given on Wednesday by the country’s ministry of education to all schools and universities to give their students a day off on Thursday so that they could attend the funeral.

Bishop Irinej recalled that Serbian state television RTS will cover the patriarch’s funeral live and called on all media not to involve any commentators in shows following the event.