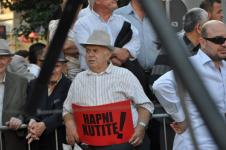 Albania’s opposition Socialist Party is expected to stage a major rally in Tirana on Friday through to Sunday, calling for a recount of the ballots from the 28 June parliamentary elections, which it considered to have been marred by fraud.

The protest, which is expected to begin on Friday afternoon in Tirana’s central Skenderbg square, will congregate in front of the office of Prime Minister Sali Berisha and will be followed by a three day and three night sit-out of a few thousand opposition supporters.

Smaller left and right-wing parties that have also contested the result of the parliamentary ballot are also expected to attend the protest.

Tirana’s mayor and Socialist party boss Edi Rama, has launched a door-to-door appeal in the last few days asking residents of the capital to participate in the rally.

“Sali Berisha wants to convince people at no avail that our struggle for freedom, starting from the freedom of the ballots, is against visa [liberalisation] and EU integration, but a ballot recount is exactly the road toward [EU] integration,” said Rama, during his tour of Tirana neighborhoods on Thursday.

According to the Socialist leader, the government should ask for a ballot recount, because then the country would learn the truth about the elections.

Rama has established the recount as a precondition for his party’s 64 deputies ending their current boycott of parliament.

An OSCE/ODIHR report on the parliamentary poll noted tangible progress with regard to the voter registration and identification processes, and in reform of the overall legal framework governing the election.

Although the electoral process was deemed an improvement on previous polls, it still did not meet internationally recognised election standards.

Despite the Socialists’ boycott, not everyone in the party agrees that the elections were stolen.

A group of deputies, headed by former ministers Ben Blushi and Arben Malaj, have contested the boycott and questioned Rama’s leadership, blaming him for what they say was a poorly run election campaign.

The EU and OSCE and the US have also called on Rama to end the boycott.