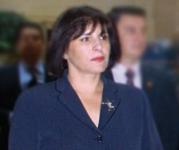 Macedonia’s Prime Minister has failed to present a platform for resolving the country’s burning row with Greece, leaving a space that is wide-open for speculation, the former Foreign Minister Ilinka Mitreva said in an interview for local media.

Macedonia urgently needs a national platform regarding this issue, she said. This negotiating platform should be agreed upon by all the political parties, but first Prime Minister Nikola Gruevski must openly explaining his position.

“I would like to hear Gruevski’s stand regarding this key issue for the country,” Mitreva said. “He has to tell us whether he is ready for compromise or not, and what that compromise means,” she argued.

Mitreva briefly led the Foreign Ministry in 2001 and later took the same post between 2002 to 2006 when the Social Democrats, SDSM party, were in power. Macedonia became an EU candidate country while she was in office.

To date there has not been an open debate within the country on the name issue, with the public being kept largely in the dark on the content of negotiations between Skopje and Athens.

The European Commission last month gave Macedonia an added incentive to resolve the name dispute by recommending the EU gives Skopje a start date for accession negotiations into the bloc, but left the decision on the date to member states who meet on 7 December.

Greece has threatened to block Macedonia’s accession pending a solution to the name dispute. Media speculate the Commission will make a last ditch attempt to find a mechanism to resolve the dispute ahead of 7 December.