No Progress in Macedonia Name Dialogue 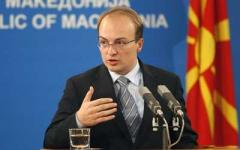 Recent dialogue between Skopje and Athens has been beneficial but has so far failed to produde any significant breaktrough in the bilateral name row, Macedonia’s Foreign Minister Antonio Milososki said Wednesday.

He said that the Greek position remains the same, that without Macedonia changing its name Greece will prevent the EU from extending a date for the start of Macedonia’s accession talks at the next meeting of the EU Council on 7 December.

“At the moment there are many smiles and handshakes, but it is hard to say that there are any signs of modification in terms of the essence of the dispute,” Milososki said, as quoted by the Macedonian MIA news agency. The minister was speaking at the sidelines of an Organisation for Security and Cooperation ministerial in Athens.

However, he expressed hope that due to the European Commission’s recommendation that his country be extended a start date for EU accession negotiation, EU members would approve the recommendation since Macedonia had met the conditions for the start of membership talks.

Milososki said that the Greek government should now verify their previously expressed idea that all Balkan countries be part of EU by 2014 by allowing Macedonia to start its accession talks.

“Macedonia and Greece are actively involved in the process and bilateral communication i.e. direct contacts are helpful, although there’s no intention to take the process out of UN frameworks,” the Minister said.

Milososki met with Greece’s deputy Foreign Minister Dimitris Droutsas Tuesday. The talk did not bring substantial progress, but was an indicator that both sides are willing to talk.

But analysts point out that it is not realistic to expect a quick solution to the row that has soured relations between the two countries for nearly two decades.

“The name dispute will not be resolved by December`s European Council. There is simply not enough time to cover the disagreements and differences of almost two decades of diplomatic negotiations in a few days,” the Professor of International Relations at the University of Piraeus, Greece, Aristotle Tziampiris says.

He argues that with enough effort from both sides a solution could be made within the next few months.