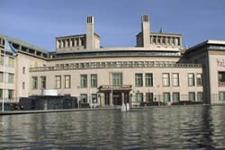 “The Trial Chamber would like to point out, once again, that the indictee should better invest his efforts in preparing for the continuation of the trial than submitting motions for ‘moral reasons’, despite the fact that he knows in advance these motions will not be accepted,” the decision rendered by the International Criminal Tribunal for the former Yugoslavia, ICTY, says.

On 30 November Karadzic filed a motion in which he stated that it was his “moral obligation to the general public and history” to dispute the legitimacy of the ICTY due to the fact that the Tribunal was formed by an act passed by the United Nations Security Council, which “did not have authority to establish it”. See: Moral obligation to the public

The ICTY was formed by a Resolution passed by the UN Security Council on 25 May, 1993 in order to try war crimes committed on the territory of the former Yugoslavia.

Karadzic, the first President of Republika Srpska, RS, and the Supreme Commander of the RS armed forces, is charged with genocide committed in Srebrenica and ten other Bosnian towns and a number of crimes committed in 27 municipalities in Bosnia and Herzegovina, as well as “the shelling and sniper campaign” in Sarajevo.

The trial of Karadzic began on 26 October this year, when the Prosecution presented its introductory arguments. It is due to continue on 1 March, 2010.

The ICTY’s Trial Chamber considers that the issue of legitimacy of the Hague Tribunal was resolved in the case of Dusko Tadic in 1995, when the Appellate Chamber rendered a decision stating that the establishment of the Tribunal “was fully within the competencies of the UN Security Council”.

Tadic, former President of a local board of the Serb Democratic Party, SDS, in Kozarac, in Prijedor Municipality, was sentenced, in 2000, to 20 years in prison for crimes against humanity and violation of the laws and customs of war in the territory of Prijedor. He is currently serving his sentence in Germany.

“In the Tadic case, the Appellate Chamber rejected the argument according to which the UN Security Council, which did not represent a judicial authority, could not form a subsidiary body which had such authority. On the contrary, the Chamber determined that the UN Security Council established the Tribunal in line with its principles for securing international peace and security,” the Tribunal’s decision says.